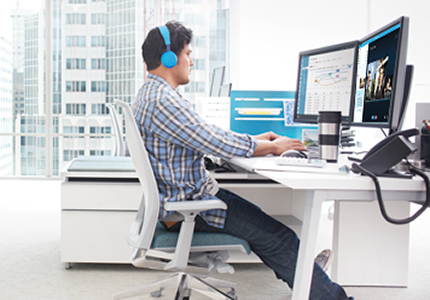 I base this claim on three criteria:

The main weakness of Skype for Business relies on the Microsoft commercial power.
The Redmond based company has always managed to easily engage with companies senior management and in turn has leveraged its position to gain sponsorship of products and services.

It used to say “nobody ever got fired for choosing IBM”, today this sentence is more suitable for Microsoft.

What is wrong with that? Absolutely nothing except that it brings to the lost of focus from real needs.

At Microsoft, at least for Skype for Business, this is what is going on: the box – i.e. branding + marketing message – is everything, but the content is secondary.

Skype for Business was created in 2007, then called Microsoft Office Communicator Server (MOCS), in 2011 it became Lync and then it was named Skype for Business in 2015.
Initially it offered only collaborative capabilities, since then product has been gradually improved and enriched to include many features of a Unified Communications and Collaboration system (UCC).

One clear objective Microsoft has today is to lend credibility to Skype for Business as  a mature and efficient product to replace large companies’ PBXs,gaining market share traditionally dominated by the main players in telecommunications like Aastra, Avaya and Alcatel.
Dinosaurs going towards extinction at the dawn of the new world and with the rise of UCC.

Officially, the improvements compared to Lync 2013 are going this way, however the vast majority of large companies are still reluctant to cross that line and embrace the UCC path that Microsoft recommends.
Why?

Microsoft officially declares an installed base for Skype for Business that would make it the undisputed market leader.
Are we sure that these numbers are trustable?

Let us start with the first question. The problem is that Microsoft wants to dominate the telecommunications market.
This started with large companies, and now it wants to conquer the SME/SMB market offering Skype for Business with an Office 365 solution.

It also wants to sell phone services and lines in every Country. In addition, the UCC platform is another piece of its offer, wich is simply another way to sell more Windows Server licenses or equivalent services in the cloud.

This vision leads to excessive complexity. A big company adopting Skype for Business on premise, sees an incessant growth of the number of physical or virtual machines required when a basic installation needs at least five Windows servers.
SMEs, even according to Microsoft, should avoid complex and expensive infrastructures, adopting the cloud model called Office 365 Enterprise, but this version still does not offer the same capabilities available with an on premise installation.
Office 365 Enterprise lags Skype for Business, which lags compared to a real PBX. We will see later what is missing in the section on functionalities.

The apotheosis of the chaos is an experience reserved to large companies attracted from the cloud model.
Waiting, often for years, that Microsoft fulfils its promise to align the two solutions, large companies have adapted to use only the Collaboration capabilities, keeping alive an often obsolete, legacy PBX. They also have been casted by the MS’s evangelists who claimed the advent of a real UCC platform, which missed “only” to make and receive calls from users outside their companies.

Large enterprises now have the choice to gain PSTN numbers and traffic exclusively by Microsoft (option called PSTN calling for Skype for Business) or to opt for the hybrid solution, installing on premise components, or to integrate third-party products such as Cloud Bond 365 by AudioCodes . They may also succeed to have the Auto Attendant service, which was not part of the functionalities of the telephony platform (!).

The result: consultancy costs out of control and delays in projects.

Lets go back to the installed base: Microsoft claims that it activated more telephone users in 2014 to companies with more than 400 employees, than any other manufacturer in the world.
This statement is not supported by the reports of the accredited analysts (Gartner, Forrester, Commfusion).
Even competitors have reacted by saying that Microsoft tends to collect only the most useful data for itself, while companies that bought UCC (and even more so Office 365 today) licenses at that time, make a marginal use of that like a phone replacement.

And these were only my critics concerning the box. I know, I am against the tide.

2. What Skype for Business is really missing?

In terms of available functionalities the list is long and boring, but why IT managers find difficult adopting the solution?

The three critical points are telephones, videoconference and interaction with external users (partners, customers and suppliers).

Fax exists since 1980, and even if marginalized by email, resists even today. Then how can you think that the physical phone will be completely replaced by software?

I truly love my phone. I like to pick up the handset or use it as a speakerphone. I dislike having a headset all day long and, even less, the feeling that you have, arriving in the office in the morning, of being kept away from using the phone because Windows is updating.

Indeed, I wish to improve the functionality of my traditional phone, as it happened to cell phones that became  a smartphone.

The phones, offered by the ecosystem of Microsoft partners, have not reached the level of quality offered by traditional competitors in the telecommunications industry yet and they are not easily integrated within the cloud solution.

As long as there are no telephones, cordless included, that support the service also in the cloud, I would not advise a company of any size to get rid of the old PBX in favour of USB handsets, coupled to a software telephone.

This situation is not likely to change quickly, if what a vendor said to me, is the truth: “the commitment to certify our phones with Skype for Business has been very expensive, the sales arising do not justify it at all”. Besides the most important Microsoft’s partner to supply phones is Polycom, but it has been acquired by Mitel, which also produces its PBX and UCC solutions. Maybe Mitel is not well known in Europe as in the US, but now it has acquired Aastra which is the market leader in the old continent.

And Microsoft in the past clearly showed not to like business partners who were potential competitors.

It is a traditional instrument for large companies as it facilitates communication between offices, often using dedicated systems for their conference rooms. The equivalent of a phone: always on, but especially suitable to ensure the best user experience even in large rooms containing several participants. Then connected to one or more large screen televisions, with noise suppression microphone and able to equalize the audio level to vary the distance of the speaker.

Skype for Business does not excel in this area. Microsoft has again underestimated the dedicated devices requirement and uses proprietary video codec which is uncompatible with H264 and therefore the large companies are asking how to further utilise their their investments, rather than adopt a throw away policy.
Room systems from Polycom, Cisco, Lifesize efficiently play their role, and they also give a high profile corporate image. Video conferencing between PC is not enough and attempts to enrich the system with expensive devices proved complex and unsuccessful.

The global Customer Experience is crucial to the success or failure of your business and with the advent of the Digital Disruption it is imperative to find solutions for the needs of the customer, before thinking about the products.

In this perspective, the feedback that reaches us by consumers has a central role as it allows us to measure if we provide a real response to these requirements and possibly recalibrate our offer according to the wishes of the public.

That is why successful companies look for a single, functional and quick channel to develop a community with clients.

WebRTC is the tool to activate this, but Microsoft does not support it yet. It declares that it will support it with ORTC (a proprietary implementation). Therefore, today, if I adopt Skype for Business my client needs to download Skype, install it, create an account and hope that its firewall does not block it. Then my client is able to communicate with my company.

3.  Architecture of Skype for Business.

Once upon a time there was the PBX, a little box that included all telephone functionalities. With the advent of the UCC things have become more complex or at least they seem to be.
But is it absolutely necessary?

I personally believe that a solution becomes irrationally complex when you add features, without rethinking its global architecture.

Even today, there are boxes that include everything, unified communications as well. Maybe they are more complex inside, compared to the old PBX. But what matters is that the effort needed to configurate , install and provide  an impeccable service, should be sustainable.

If who makes them is brave enough – and will be – to start anew from scratch thinking about customers’ needs, verifying results and engineering them over and over, then these boxes will really work reliably.”