Moving phone numbers to a new service often feels like any other form of moving: long, tedious and slow. Much like changing houses or utility providers, getting a new telephony operator is often associated with too long a time spent waiting on progress — and, what’s worse, no ability to use your phone in that meantime.

The main culprit behind this slow, unwieldy change is number porting. In plain terms, this is the process of moving an organization’s existing phone numbers over to the new service.

Although this might sound like a simple enough process, in practice it’s a procedure fraught with complications. Far from instant, porting numbers typically takes hours on end, with said numbers being unreachable all the while. This is assuming the service can port your numbers at all, as sometimes the easiest approach is to get entirely new numbers during the switch (no doubt creating confusion among current customers who try to dial the contact they know).

But the thing is, none of this is a reason to stay with your old provider until the end of time. With Wildix, there’s a simple alternative: Instant Virtual Porting, a process that makes every one of your old numbers functional on a new system with no fuss, frustration or wait time. Better still, this process keeps your old numbers in service even during that porting process.

How does it all work? We’ll explain in more detail right here.

Before getting into how Wildix does number porting, it’s important to understand how the process typically works, especially when using physical PBXs.

This porting process involves a transfer of DIDs, or “direct inward dialing” numbers, which are numbers associated with an individual PBX. Basically, any individual number given to staff but associated with your company PBX is a DID. It’s these DIDs that must be transferred to a new PBX when making a switch to a new provider.

However, under this method, the porting process must be conducted before fully switching over to that new provider. Canceling your old provider’s service without having completed the porting will cancel all your associated numbers, meaning you will no longer have the ability to make the transfer at all.

So, let’s say you haven’t canceled your old service yet, and you ask your new provider to port the numbers. What will typically come next is that a technician will arrive early on a weekday about two weeks out from your intended service switch date, so as to complete the process with minimal impact on your operations. (Remember, during the process your PBX cannot send or receive calls.)

The tricky part is, there’s still no guarantee that the process will be completed quickly. Ported DIDs can end up rejected for a wide variety of reasons, especially if there isn’t sufficient coverage in the new area or your new telephony operator hasn’t made an agreement with your old one. Then there’s the multitude of technical reasons DIDs can end up rejected, from simple system failures to misentering information on any one of the dozens of numbers. Effectively, there’s no simply no way of telling how long this process will leave you without phone service.

This bevy of complications and frustrations can often leave businesses sticking with an old provider even when the service is terrible — much as they would like a new operator, the prospect of losing either their old DIDs or an entire day of phone service is just too much.

Porting numbers is made significantly easier when done through Instant Virtual Porting, a service available through Wildix’s international voice service, CLASSOUND. Here, the process consistently takes very little time, doesn’t require an on-site technician and, best of all, allows you to use your PBX the entire time.

The reason why comes down to the fact that the porting process is done here via number forwarding. Instead of putting all your old DIDs directly onto the Wildix system, Instant Virtual Porting issues new DIDs — with the important note that it still directs incoming and outgoing calls through those original numbers. 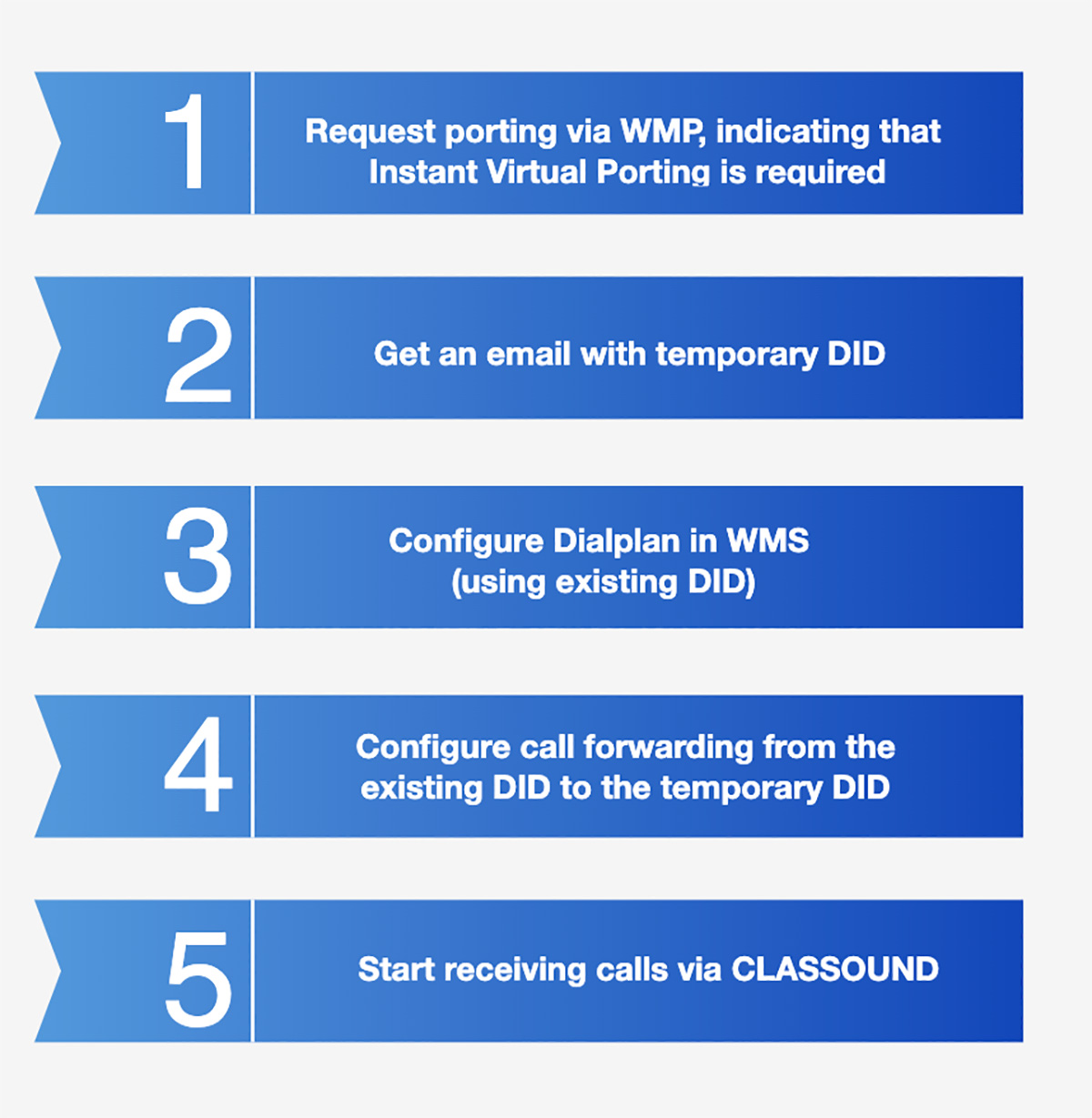 The process here is a lot like postal forwarding: Although messages will ultimately arrive at a new address, sending them to the previous location will still get them there. Instant Virtual Porting does this same process with voice calls, ensuring that dialing the old DID will connect callers to the same people. In fact, outgoing calls go through the same process, meaning they’ll show up on caller ID as their old number.

Because this process doesn’t require a switchover of old DIDs, it occurs quickly and with far less room for technical errors. And because the entire procedure is performed through a virtual SIP trunk provided through CLASSOUND, it can all be done remotely — technicians handling your switch never have to arrive at your business to make the switch.

Altogether, Instant Virtual Porting still gives the same results as traditional DID porting (your old numbers under a new service), just without the headaches, wait period and downtime.

The Tech Behind the Switch

We mentioned earlier that Instant Virtual Porting is made possible by CLASSOUND. As we said, CLASSOUND is an international voice calling service, but it’s a lot more as well.

CLASSOUND is a core element to the call flow of Instant Virtual Porting.

Because the service acts as a virtual SIP trunk for your business, CLASSOUND connects all your VoIP calls through a secure, fully cloud-based system — regardless of whether you make those calls through desk phones, laptops or mobile devices. On top of easily forwarding your old DIDs to this new service, CLASSOUND also brings you voice calls to and from over 200 countries and territories, all for a flat monthly fee.

Plus, just like the Virtual Porting service it provides, the installation for CLASSOUND is quick, easy and doesn’t even require an on-site technician. With that quick deployment, you get access to international calling, instant failover, built-in security, SMS capabilities and HD audio — all while easily and conveniently keeping your old DIDs.

Find out more about CLASSOUND on our webpage.

All this is to say that usual tech inconveniences are no reason to stick with a less-than-helpful service provider for the long run. Even if making a switch is usually hard, telephony has come long enough of a way to streamline and simplify that change, and leave zero impact on your customer base through the process.

Thanks to Instant Virtual Porting, all of that is true even when it comes to changing your phone numbers over to a new provider.

For more information on VoIP technology, subscribe to receive our magazine for free!