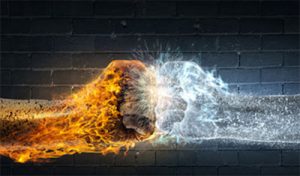 I am about to tell you a story about something that happened to me a few days ago.

Steve Osler and I had a few laughs ‘sitting at the Kite bar,’ and this is how the idea of sharing my experience with the group came to be.

In all honesty, there isn’t much to tell, but the dynamics with which it occurred is quite funny (and even educational). No soda and popcorn needed, I will be brief…

As I was saying earlier, a few days ago I went to meet with a client. A multinational player in the hotel industry, who is the owner of a structure on 7 hectares with approximately 1,000 rooms.

The purpose of my trip was just a simple visit, but I found myself casually, and indirectly, in a confrontation with the competition: Mitel.

Confrontation is maybe too strong a word. Let’s say there was a brief “exchange of opinions” and we will see later why I put this in quotation marks.

I did not expect to have to go back and explain to the client “why he should purchase from me instead of from the direct/indirect competition or choose to do nothing,” because I had already done this, and the offer to which he could not say no to, he had already accepted, installed and tried out with success. 18 months of nurturing…this was not a cold client.

I was there for the next step; to evaluate the technical, economical practicability of a possible up-selling for the entire structure.

Even in situations where you think you have the cat in the bag, it is a good idea to not forget the principles of the professional sale, and in particular the fact that any doubt that remains at the end of the negotiation MUST be resolved by the sales agent himself.

…the client will continue to have these doubts leading to them having second thoughts, running the risk of them stopping the negotiations.

So, what could possibly have set off such doubts about the reliability of the Wildix solution (David) against Mitel (Goliath).

The comparison of competitors is normal. Put yourself in the client’s position who is there listening to the exchange of affirmations between the two ‘professionals’:

Wildix is known, but not known enough – not compared to Mitel, and in sales, this comparison is the first move by a client, and a salesperson must be able to anticipate and debate that.

The Mitel agent was aware of this, and he did a good job of laying down his position as a “Macho leader,” mentioning the Gartner Magic Quadrant, the solution dedicated to important hotels, brands that have already placed their trust in Mitel, etc..

All considerations that are irrefutable and of easy to reason (I will return to this later).

I want to remind you that neither of us were there to start a sales battle, but it is a good idea to remember that two things never sleep:

As good old Al Ries would say…At this point I had two choices, to fight fire with fire, with a “Yes, but me too” attitude, and grab onto the back of the trolley car like in classic films of the 30s (where the actor always fell to the ground rolling disastrously) or, wait for the other rep to make a false move…

…and I chose to wait.

Although the position of market leader was held by Mitel, the bargaining chip was held by me.

It would have been both arrogant and suspicious to contrast the affirmations with a “Yes, but me too…and more” and in the little time available in front of the client, it would have led him to possibly change his mind.

But the midday bell had rung on the WARRANTY!

“We, at Mitel, are reliable, we have strong shoulders, we do not turn our heads if after 1 year and 15 days, A PHONE MALFUNCTIONS, send us a RMA and we will replace it.”

To which I responded:

“So you are saying that the warranty you provide is for 1 year?”

“Well, sure, this is how it is among companies, but if you go over 15 days, we don’t make a fuss, we replace it for you.”

Then I, taking 10 seconds to lower my glance towards my notes, come back with:

“Ohhh, I did not know that! We do that as well, if a client breaks a phone after F-I-V-E years and 15 days, we don’t make a fuss either…”

He responds, in a moment of dejection:

“5 Years?! But with what conditions, at what price?”

“Well, nothing,” I say, “Wildix includes a F-I-V-E year warranty with all its products. I don’t know, you should ask the Osler brothers – the owners – I think they are sure of what they sell.”

The client looks, nods and answers: “Now that is quite a difference, there is not much more to add.”

How does the story end?

Remember how at the beginning of this article I mentioned, in quotes, that this was more “an exchange of opinions” than an actual confrontation? Well…

The Mitel agent and I ended up at the bar, where I played the part of Father Gabriele and he confessed about the difficulties of working with Mitel, the lack of reactivity in resolving problems, the errors of integrating with the Spanish PMS (they never work as they should), the information lost once in the management offices…basically the bubble where good agents end up smothered.

So, what happened to the client? Well, he understood the position in a tangible way, without having to remove his pants and start a useless measurement contest.

And for me, I learned two important lessons:

(The first): Professional sales is made up of steps and processes, you can’t skip ahead, you can’t improvise – even when the temptation is stronger than reason. One who is prepared knows how to wait and recognize the exact moment in which to carry out an “intelligent” attack vs an emotional one.

(The second): When you ask for rain, you have to expect mud.

Could it be that I involuntarily converted the Mitel agent?