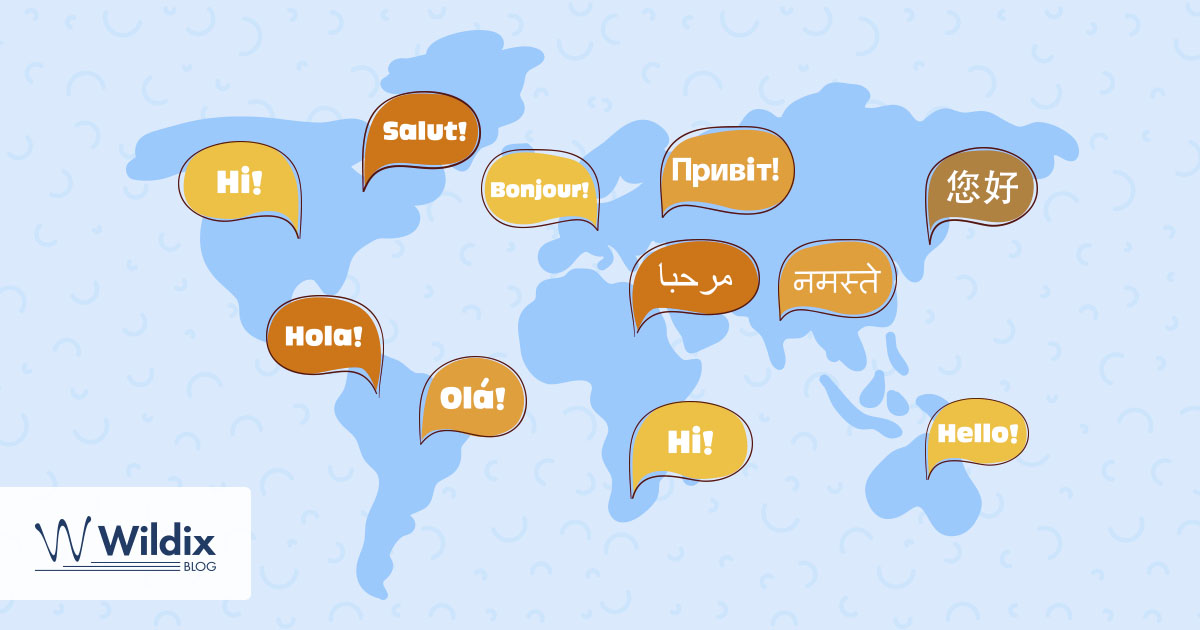 International Idioms to Pique Your Interest

Language is an odd thing, and it gets odder when you step outside of your own little neck of the woods. That’s because words rarely mean the exact literal definition they convey; rooted deep into every phrase and larger sentence are countless years of context, shared reference and metaphor that a cultural outsider may not be privy to.

But that doesn’t mean languages have to stay a mystery. If you keep up with your international neighbors and go past the surface of words, you can glean a lot more meaning from there.

To demonstrate, here we’ll have a look at seven languages’ idioms: phrases with an intended meaning that isn’t immediately clear from the words themselves. Although each may look odd at first, with just a bit more cultural context, they’ll all become far clearer — so much so they might find their way into your everyday speech.

French: “avoir le cafard”
Translation: “to have the cockroach”

What’s your usual reaction to a cockroach? Usually, it’s disgust, shock or maybe even fear. But one reaction that’s far and away less common would be “sadness.”

In France, however, sadness is exactly the emotion conveyed by this phrase. Yes, the French “avoir le cafard” — literally “to have the cockroach” — means to be melancholy or have a case of the blues.

Where on earth did this meaning come from? It’s in part a pun, actually. “Cafard,” on top of meaning “cockroach,” can also be used to mean “hypocrite” or “melancholy.” This particular use of the pun first appeared in Charles Baudelaire’s poem Le fleurs du mal and has stuck ever since. Apparently, imagining sadness is just that powerful of an image. (Just ask Franz Kafka!)

Next time you see a cockroach — which hopefully isn’t any time soon — maybe it’ll strike you as more of a case of tragedy than an occasion to pull your feet off the floor in shock. Well, probably not, but at least you’ll have this usage to think of.

German: “Ich habe einen Kater”
Translation: “I have a tomcat”

On the other side of the animal friendliness spectrum: cats! They’re a wildly popular pet, and even among those who aren’t fond of them, at least they won’t provoke shock and horror the way a pest will. So, surely if Germans talk of “having a cat,” it’s a positive, right?

Actually, not so much. In Germany, “Ich habe einen Kater” — literally “I have a male cat” — in many contexts will mean “I have a hangover.”

Thankfully, the origins of this one don’t seem to be from any distaste for feline friends. Instead, it appears the roots of this German expression come from Greece: the Greek “katarrh,” meaning a condition similar to a common cold, is quite close in sound to “Kater,” and that resemblance led to the German word having the same meaning colloquially. And since the symptoms of a cold aren’t too far off from those of the morning after a particularly lively party, the “cat” terminology eventually stuck.

So should you be in Germany and want to talk about the kitty you keep at home, maybe take care to specify it’s the cuddly variety and not the sort that pounds nails in your head.

This is an odd image, but bear with it for a moment: Suppose you were trying to scramble up an enormous floor mirror. It doesn’t take much imagining to realize it would be next to impossible. It’s a perfectly smooth surface, so where do you grab a foothold? How are you supposed to keep from sliding off?

That futility is exactly the point of this Italian phrase. The term “arrampicarsi sugli specchi” doesn’t mean anyone is literally trying to clamber up glass, but it does mean what the person is doing is just as impossible and even ridiculous.

Specifically, this phrase is used in the contexts of arguments: If someone is trying to defend a completely indefensible point, using nonsense or unbelievable excuses the entire time, they’re effectively trying to climb a mirror. In English, the phrase “grasping at straws” is a decent comparison.

Any future arguments you may find yourself in, perhaps thinking of a mirror is a good idea — not just for self-reflection, but also to consider if you or the other party is trying to crawl up it.

From Spanish comes a somewhat grosser entry, though just as puzzling as others. To those who don’t speak the language, this expression probably seems to indicate something normal — after all, how many people can you name who have hairs on their tongue? Surely speaking without a mouthful of fur is just the default.

But since it’s appearing on this list, this phrase isn’t that straightforward. In Spanish, “to speak without hairs on your tongue” actually means to speak honestly and frankly, usually without regard for social pressure.

Thinking about the image a bit, this makes more sense than first imagined. If one did have hairs on their tongue, they’d have a whole host of problems (even beyond some very painful waxing sessions). In particular, they’d have very garbled, highly filtered speech. But without these imaginary hairs, one can speak freely and openly to the heart’s content. Although we don’t have an exact origin for this idea of a fur-lined tongue, it’s this idea of blocking out words that keeps the expression relevant.

Of course, since speaking too frankly can still land someone in very hairy situations, we might not want to take this idiom too far. That goes extra if you don’t much care for thinking about fuzz in your mouth anytime the cat’s got your tongue.

Take a moment and let yourself drift off to your own little dreamworld. Of course, each person’s daydream land is different, but some commonalities would probably include fluffy clouds, majestic castles and — mayonnaise?

In Brazil, at least, that’s the case. Within South American Portuguese, “viajando na maionese,” literally “traveling on mayonnaise,” means to be living in a daydream, to have your head in the clouds or otherwise not be demonstrating a firm grip on reality.

The origins of this phrase aren’t terribly clear, however. One theory is that in the past, Brazilian mayonnaise factories would promise company-paid trips to employees, then fail to provide them. Another thought is that because mayonnaise is a mish-mash of diverse ingredients into one smooth, creamy sauce, the word itself came to indicate a confused mixture of ideas in Portuguese.

However this one came to be, though, it sticks out today as a fascinating way to flavor everyday phrases.

Norway: “ugler i mosen”
Translation: “owls in the moss”

If you’ve seen Twin Peaks, you may already have a sense that owls can figuratively signify danger. But even then, what’s this phrase doing in Norway? And anyhow, what are owls doing in moss of all things?

To start, “ugler i mosen” — yes, literally meaning “owls in the moss” — is a Norwegian way of saying that something is off about a given situation, and not in a funny way, either. Actually, the phrase suggests you’re suspicious about things, or maybe even that you suspect danger is incoming. An approximation in English might be “I smell a rat.”

Now, if you’re becoming concerned that a trip to the fjords might run the risk of birds of prey lurking in the undergrowth, however, don’t fret — the origins of this phrase are a bit more complicated. The idiom actually began as the Danish expression “uller i mosen,” which literally means “wolves in the swamp.” This, of course, likewise expressed a fear of some hidden danger or unpleasant surprise, since a pack of wolves hiding in swamp waters is quite the nasty ambush. However, as wolves disappeared from the Nordic areas from overhunting, and as Denmark lost control over Norway after the Napoleonic Wars, “uller” shifted to the more present (and phonetically similar) “ugler,” or “owls.”

Life (and language) finds a way, it seems — but as this phrase points out, it’s wise to stay on the lookout for fishier examples of those adaptations.

Going boating can be a fickle or even dangerous experience. Just watching the ocean from the beach one can easily see how often the mood of the water will change from calm to violent.

This principle is at the crux of the Ukrainian phrase “chekaty z morya pohody,” literally meaning “to wait for weather from the sea.” The figurative meaning, however, is to take no action when some kind of response is very clearly needed; just as it would be foolish to simply wait on your boat in the middle of a raging storm, this idiom describes a situation where inaction is exactly the wrong approach.

While one common thought is this phrase comes from sailors at sea, who have no choice but to sail their way out of bad weather, it’s also possible it arises from landlubbers. After all, if you spot bad weather while on the beach, what sense does it make to wait for it to change while on that same beach? Watching it “from the sea” means you’ll just end up caught in that storm all the same.

At sea or just living life on land, then, bear in mind that just because a storm will pass doesn’t mean waiting it out is the smartest move.

As many differences as each culture and region has, the fact is they’re never truly impenetrable, even to outsiders. With just a bit of applied learning, it’s easy to get to know a different part of the world, no matter how the people there express themselves.

At Wildix, this idea has long been embraced and put into action with multiple offices all over the world, each established to support local markets with enterprise-grade communications technology. That’s on top of the partners Wildix recruits from around the globe to bring unique value to customers.

As the song goes, it’s actually a pretty small world when you break things down. Though each of these idioms reads as strange, just a bit of context will make what seems an odd set of words turn into something immediately meaningful. At the end of the day, after all, it’s human thoughts and needs that drive every saying in every language, no matter how strange they may appear from the outside.

For more unique facts and insight, subscribe to receive our magazine for free!