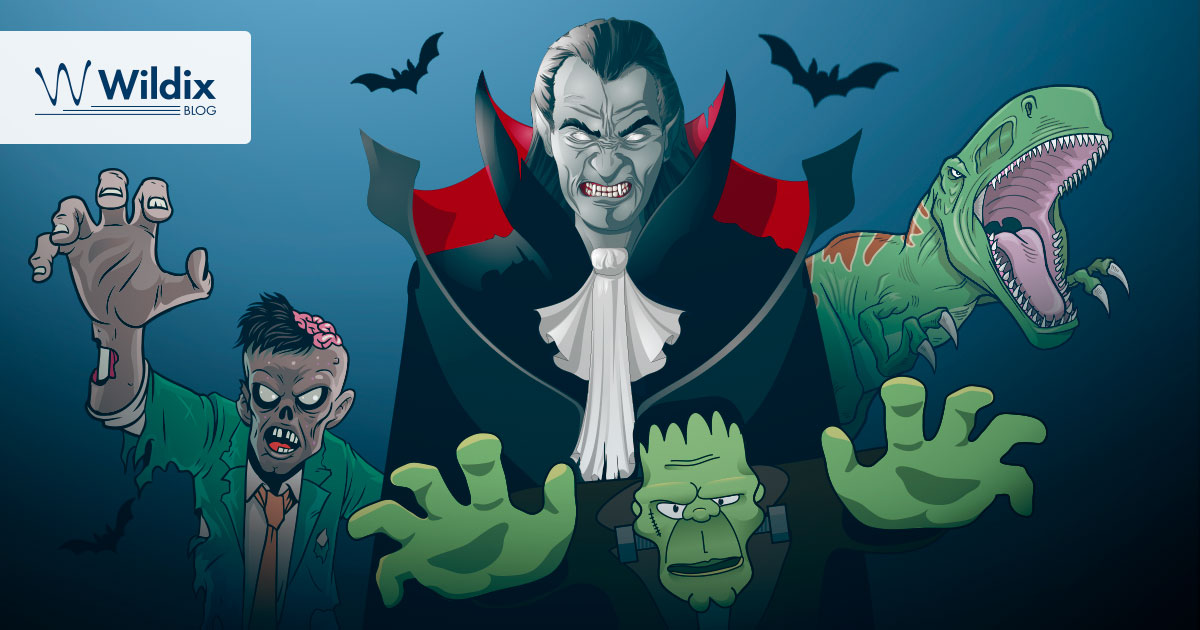 It’s a season of frights — of ghouls, goblins and things that go bump in the dark — but for those in the tech sector, certain monsters exist the entire year round.

Yes, certainly there are the common gremlins that keep techies awake at night, and these too are important for anyone in the UCaaS business to know. Ask any IT expert, and they’ll eagerly regale you with bone-chilling tales of glitch-causing ghosts in their machines or of invisible, unspeakable creatures tangling carefully laid cabling.

Yet far more frightening than even these technology fiends are the biggest monsters of UCaaS. For in this darkest realm of devilish beasts, there lurk terrible technologies, decrepit business models and even — worst of all — drainers of your business’ life-blood.

Read on, business owners, if you dare, and discover what horrors lie beneath the pleasant masks of welcoming UC&C vendors.

Our ghoulish gallery begins with beings sometimes called the VoIPTruz. These are strange creations, rarely with much recognition or history behind their name, who like Mephistopheles to Faust promise fortunes untold, should you only sign on with their flashy modern company — but, they ask, please ignore the system’s glitches and crashes, it’s still partly under construction.

To a trained technical eye, the platform sold by the VoIPTruz is not only unstable but utterly hideous. Akin to the mad doctor’s reanimated monster, this system is not naturally made; instead, it is cobbled together from components long thought dead by the market. Their graphical interface is taken wholesale from open source software, only with the logo replaced with the would-be startup’s. Their VoIP systems are patched together from Asterisk, FreePBX or whatever other corpses the technicians could rob from the internet’s deepest tombs.

As terrifying as these solutions are to behold, the far worse nightmare is to install and maintain them. For from this foul coagulation of bloated parts will inevitably come system failures and entire outages, which will take hours upon hours to address.

Worse, the VoIPTruz expects these failures and has even built their business around them. Rather than assisting their partners unequivocally, they will charge them additionally for tech support, bleeding their pockets dry as end customers grow thin on patience.

Fortunately, these vendors and their creations are easy to recognize. Typically they’ll be akin to basic startups in appearance, with minimal software on offer. What is on offer, of course, will be hastily sewn together and less than functional. Be on the lookout as well for excessively large call centers over R&D centers, as these mad scientists of UCaaS know they make more money from stitching their monsters back together than from creating something the market truly wants.

Unknown to much of the world, some giants of old still walk the earth — though their footsteps no longer make the ground tremble.

Typically, we would call them carriers, the typical providers of internet service and TV. But make no mistake: these are the dinosaurs of communications, the beasts who once stood at the top of the entire food chain yet now are ancient relics clinging to life.

Not content with fees from those services alone, carrier-dinosaurs long ago moved into telephony, even into providing some form of UCaaS alongside their internet options. To many MSPs, the size of these beasts makes them seem insurmountable. Indeed, carriers typically work by competing on price alone, and in many cases, they drop the fees on their services so low that they can swallow up many businesses with a single bite.

However, the age of these beasts is their biggest weakness. Old, slow and lumbering, the carrier-dinosaurs can be quickly toppled by weaving around them with purpose-built solutions that deliver specialized value. Should one such monster threaten to swallow one of your deals whole, simply remember to use expertise and agility against their brute strength, and you’ll win out every time.

But dinosaurs are not the only ancient powers that still roam above ground. Where carriers have fallen, fiends of a more unnatural sort continue to prowl. These are the walking dead vendors, the zombified husks of companies kept in motion by powers beyond imagination.

Once, the walking dead vendors were the rulers of their markets, not unlike the dinosaur-carriers. By seizing upon the early rise of UC&C technology, they climbed to the top and claimed profits across wide regions. Yet as the years went on, these regents stagnated, their business models decaying as does flesh beneath the grave. Now they still shamble about their markets, but as shadows of their living selves, with none of the innovation or thought seen among the living.

How are creatures so fragile and unthinking still among us? The reason they have not yet been overthrown is simple: they still cling to their old days of glory for status and power. Some poor MSPs even see these zombies’ names and think them among the living, but don’t be fooled — if they have no new developments, no new tools or solutions, they are truly bereft of life and better left for the silence of the tomb.

Vampire Vendors: The Siphoners of Life-Blood

Last, yet assuredly most horrible of all, are those we call vampire vendors. Quite like Transylvania’s infamous count, vampire vendors operate through a veneer of nobility; to outsiders, they are esteemed rulers of their lands, patrons whose welcome should be accepted on their word alone.

Yet their subjects — and their victims — can tell you the sinister truth that preys behind their wide, inviting arms.

Yes, on the surface, vampire vendors will lure MSPs into their lair with grand, powerful-looking solutions and promises of sharing with you their success. But their true intentions are to profit from those same MSPs’ hard work. Rather than a partnership, what vampire vendors seek is your very business life-blood, your customer base — and once these fiends have hypnotized their victims into a state of servitude, wherein an MSP acts as only a sales agent paid in commissions, they will siphon out from them every last name, address and contact number on hand. Once the feast is done, the vampires will bill and manage these customers directly, leaving the victim without contacts and, indeed, without life enough to keep their doors open.

One must be wary of vampires when searching among vendors, for their power is their charm and siren song of success. They will appear as normal as any UCaaS provider — with modern solutions, a wide market presence and much of their income generated through the channel — yet their intentions will always be betrayed by direct sales models and a staunch refusal to let MSPs own their customer base.

No matter how effective their technology or promising their market position, vendors with channel-bypassing practices such as these must be avoided at all costs, lest you become the next victim in their ever-growing army of the undead.

Each a unique threat, these ghouls of the UCaaS rogues’ gallery frighten and astound with the terror they may wreck. More horrifying still is that none can truly be defeated as a lone MSP, for each is too powerful to be done in by individuals.

But if you as an MSP steer clear of these creatures of the night, it is still possible to find success. In fact, banded together under a truly pro-channel vendor, MSPs may yet put these enemies to rest.

This is the mission from Wildix — a UCaaS company recognized by Gartner for never selling direct, remaining innovative in technology and ensuring the channel grows via ownership of its own customer base. To learn more about Wildix, visit our partner page.

This long-term mission aside, all those in tech must beware of monsters such as these which lurk amid the industry. Take one misstep before them, and you may come to know their terror firsthand.

For more tips on doing business in unified communications, subscribe to receive our magazine for free!