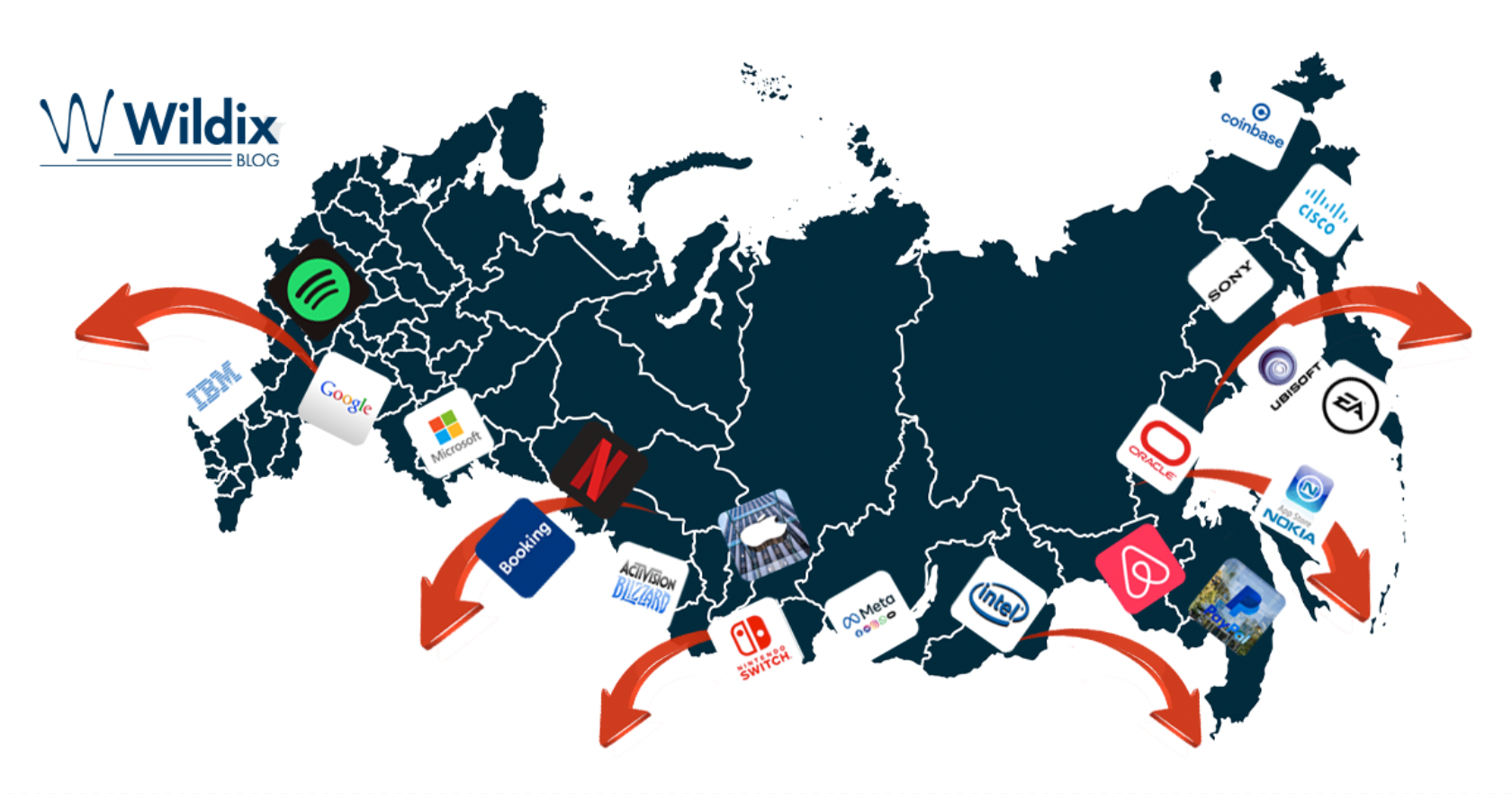 For upwards of a decade, cyberattacks and general risks to online security have been originating from Russia — all increasing in both frequency and obviousness in their association with the Russian government. Now, with Russia’s invasion of Ukraine, the Kremlin’s cyberwarfare efforts have explicitly boiled over into physical warfare.

As a result, state-sponsored activities to illicitly gather information can no longer be considered mere abstract threats; now, these activities act in service of actual attacks and destruction.

In the wake of this warfare, it’s especially important to consider where tech companies stand with regard to Russia. After all, continued investment in Russia’s technological infrastructure represents potential ways for the Russian government to continue cyberwarfare and, by extension, aid the actual war efforts they’re conducting in Ukraine.

As a result, many tech companies have explicitly announced full severance with Russia in any form, including major players such as Apple, Oracle and SAP. Wildix, in a similar move, has denounced the invasion and explicitly severed all Russian accounts from its cloud-based communications network.

But how have other companies in digital communications responded so far to the event? While some have reacted, many remain silent on the matter.

Tracking How Major Communications Have Responded After the Invasion of Ukraine

The developer of the Teams platform has not been shy about its stance on Russian ties: on March 4, 2022, the company announced it would be suspending all new sales and services in Russia, explicitly citing the invasion of Ukraine as the reason.

All the same, that announcement alone may not indicate a total severance from Russia. At the time of writing, Microsoft still operates a Moscow office, though it is unclear whether that location will be vacated or continued to be in use. However, on the same day as its announcement that it would stop services in Russia, the Moscow Microsoft office posted a job advertisement seeking a technical support engineering manager on LinkedIn. This seems to suggest plans for continued operation in Russia.

Looking over Vonage’s website, there are sections that seem to be targeting a Russian base of consumers. Additionally, Vonage’s parent company, Ericsson, has a significant Russia-facing section on its respective webpage as well as a large number of job listings for Russian offices. As of now, Vonage itself has not yet made an announcement regarding future plans for its Russian links in the wake of the invasion of Ukraine.

What Vonage has issued is, among usual social media posts, a reiteration of a 2021 trends report that uses data from Russian customers. While this report must be downloaded before it explicitly shows Russian ties, combined with the existing Russia-targeted content on Vonage’s website, it suggests continued ties with the nation.

Although we likewise haven’t seen RingCentral issue a statement regarding Russia or its invasion, the company seems to have removed mentions of Russia from its website. It has also distanced itself from old ties with Russia, with one of the most notable being its co-founder becoming a full US citizen.

Some suggestions of ties remain, however, such as Glassdoor receiving reviews for RingCentral’s Moscow office being added as recently as March 1st, 2022. Furthermore, RingCentral still notes on its website that personal data stored in the US or European Economic Area may be accessed from Russia.

By and large, ties between 8×8 and Russia appear to be minimal from the outset, the company having no data servers, offices or apparent jobs in the nation. Although 8×8 has not spoken on Russia or its invasion, it appears they have little in the way of connections to actively sever.

The one exception seems to be that last year 8×8 announced they were extending telephony services to Russia, an offer from which they don’t appear to have stepped away.

In the case of Cisco, the matter of Russian ties is quite explicit. On March 3, 2022, the company formally announced a halt to all business operations in Russia, pledging support for its Ukrainian relationships and condemning Russia’s invasion of the region. A cursory search of the company’s job listings backs up this commitment, as none appear under the Russian Federation filter.

Although Cisco has an office located in Moscow and the company’s Russia-facing website remains up, there is nothing to confirm either of these resources remain in use for the Russian market.

Though for Unified Communications purposes we look at Google as the developers of Meet, their total business solutions are, of course, much farther reaching. One of the company’s main services, Google Ads, is being suspended in Russia as of March 3, 2022, in response to the Russian government’s increasing demands for censorship of advertisements shown in Russia.

Earlier, Google had removed the Russian state-sponsored news sources Russia Today and Sputnik from their mobile app store. It appears the actual Meet platform, meanwhile, is still usable in Russia.

The Canada-based Mitel has provided no statement regarding Russian ties, despite the company doing business in the region since 2011 and themselves having an office in Moscow. They have also advertised holding a roadshow with a stop in Russia in 2019.

It must be specified that the company, despite having a telephony presence extending into Russia, has major data centers located only in the UK, France, Canada and the United States. Again, however, there is nothing to suggest Mitel has severed the past business ties it has advertised with Russia.

Although Wildix had few Russian connections initially, the company has worked to sever even those by removing its few accounts located in Russia from its cloud PBX system and any mention of covering Russia from its website.

As Wildix has a significant number of Ukrainian staff, the company has made efforts to evacuate as many employees as possible from the country amid Russia’s invasion. This is in addition to a wider push to move customers onto cloud PBXs for the increased security the platform affords, particularly against Russia-based cyberattackers.

As of the time of this article, Russia seems to have no intention of scaling back its invasion of Ukraine, which likely means a scaling up of its already extensive hacking operations. As these cyberattacks have historically included the seizure of confidential documents and ransomware, it’s all the more critical that individuals and businesses make use of safe online practices.

One such practice to implement is considering if the networks and channels you’re using are associated with Russia. Historically, Russia-sponsored cyberattackers have made use of whatever internet channels they can access to conduct illicit operations. The unfortunate fact is that if any channels you use are associated with Russian businesses, the risk of them being co-opted increases.

Moving forward, it’s vital for consciences and security to evaluate who is remaining in Russia amid these attacks and who has elected to walk away entirely.