The update to Safari includes various security patches, bug fixes, and includes a handful of new features for the Mac web browser. Safari 11is only available for Sierra and El Capitan as a separate download. Safari 11 is included, by default, in macOS High Sierra 10.13, which was released for Mac users on September 25. 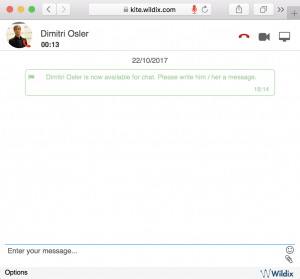 Among the new features, the most important is surely the support for WebRTC.

The first Safari Technology Preview versions became available earlier this year. At Wildix, we closely followed the development of WebRTC into Safari. Since July, our Kite WebRTC Contact Center Solution supports audio calls over Safari 11. Thus, making it one of the first WebRTC platforms officially supported by Safari 11. Video support in Kite, as well as support for Wildix Collaboration, is coming later in November.

Performing a Kite WebRTC call is now as simple as pressing the Dial button and allowing the website to use your microphone. 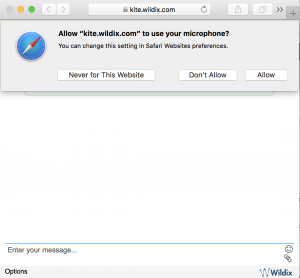 WebRTC support in Safari for Mac OS X is a giant step forward for WebRTC adoption on the market. Now, any user running the latest Mac OS X version will be able to perform phone / video calls, and audio / video conferences using the default OS browser without installing any plugins.

As you can see in the picture, the Safari ‘Develop’ menu now shows a dedicated WebRTC entry with specific settings to allow web developers to disable and enable specific features, mainly related to security, while testing their app. 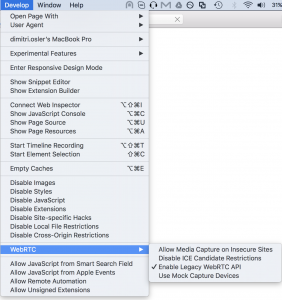 In the following picture we can see a Kite call ongoing on Safari 11 right from the browser.

Currently, WebRTC support in Safari 11 for iOS is still not ready. However, it is clear it will be just a matter of time before we’ll see Wildix Kite working on iPhones and iPads.